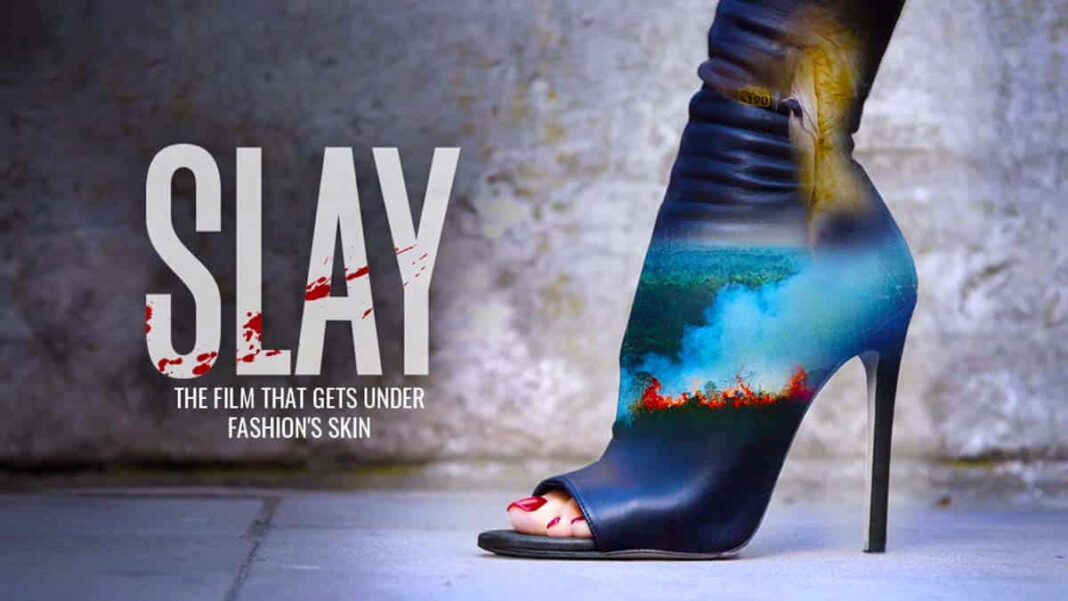 SLAY, the first feature film of its kind on the use of animal skins in fashion, with a focus on fur, leather and wool, reveals striking facts about the fashion world. This documentary film is about the travel around the world of investigative filmmaker Rebecca Cappelli, who was featured in the 2018 documentary ‘Let Us Be Heroes’, to uncover the dark side of the fashion industry. While exposing fashion’s greenwashing tactics, SLAY brings a unique perspective to the animal skins trade by focusing on animals, without forgetting the people who work and live at the mercy of the industry.

Cappelli’s journey of discovery spanning 5 continents, including Australia, China, India, Europe, the USA and Brazil, unravels a harrowing story of greenwashing, mislabeling, animal cruelty and cover-ups from some of the world’s major luxury fashion brands. The film, produced by Keegan Kuhn, co-director and producer of What the Health and Cowspiracy, and directed and edited by Abhi Anchliya, asks an important question: “Is it acceptable to kill animals for fashion?”

The crew, beginning to film a full year before the pandemic, got exclusive access and footage inside fur farms, tanneries, wool farms and skin processors facilities in Australia, China, India, Europe, the USA and Brazil. It was worked with a network of crew, photojournalists and filmmakers to finish remote shooting of the film, including music from Kate Bush, Moby, Catnapp, Kiasmos and more. Three years in the making, SLAY featured inspiring experts from the fashion sustainability field and animal rights movement, with Samata Pattinson, Bandana Tewari, Dana Thomas, Joshua Katcher, Lucy Watson, Earthling Ed, Melanie Joy, Emma Hakansson, Alexi Lubomirski, and more.

“If someone would have told me even half of what I have discovered doing this film, I would not have believed it”

In the trailer of SLAY with striking images of the industry, it is stated that the fashion industry kills at least 2.5 billion animals every year. Rebecca Cappelli says that she has spent the last three years investigating animal skins in fashion: “They have a damaging impact on the planet, on people and of course on the animals. If someone would have told me even half of what I have discovered doing this film, I would not have believed it.”

Cappelli, stated that if she asks what the biggest issues in the fashion industry are, environmental impact and workers’ rights will probably come to mind, noting that one of her main inspirations for doing this film was completely left out of this conversation. She points out that this film is too controversial for the mainstream media and says: “…but animals deserve to be seen and heard. In fact, they have been ignored for too long. But together we can change that.”

SLAY, which offers an in-depth and eye-opening look into the realities of today’s fashion industry while pointing the way towards viable and sustainable alternatives, will be available to watch for free on the WaterBear interactive streaming platform from September 8.