Recycled PETs Offer A lot Of Advanges in Industry

The leading magazine of the textile and printing industries reached its readers with the Textilegence January - February 2021...
Read more

An important sale was realized in the textile industry. Alpha Private Equity concluded an agreement for the sale of...
Read more

Sustainable production model is not an option but a ‘must’

The textile industry causes 1.2 million tons of carbon emissions per year. It is estimated that by 2030 it...
Read more

Of the 10.2 million tons of nonwovens produced globally in 2015, around 2.3 million tons were based on polyester PET staple fibres and an estimated 32% of this output – 725,000 tons – was also made from PET fibres that had been recycled from drinks bottles, (known in the industry as rPET).

This is positive for the environment, but the recycled PET industry is currently in the doldrums for the simple reason that the price of virgin PET is far too low – especially in China where there is a considerable amount of overcapacity.

According to analysts PCI Wood Mackenzie, around 10.9 million tons of PET bottles and containers will be collected in 2016 – about half the total that could be reused – rising to around 14 million tons by 2020. Over 50% is collected in Asia, with China alone representing 28% of the global collection and consistently having the highest collection rate globally. Western Europe collects a further 18% and North America 13%.

The reason for China’s success is due to the fact that PET bottles have an immediate re-sale value as a result of the country’s huge PET processing industry, but further financial incentives have also been introduced. In Beijing in 2012, for example, reverse vending machines, which pay out subway credits in exchange for returned bottles and containers, were introduced across the city.

By contrast, in Western Europe and North America, collection is still very much down to conscientious citizenship, although the infrastructure is in place to make recycling very easy and the reverse vending concept has even been adopted by the Aldi supermarket chain in select cities in Germany.

China, however, is also a net importer of PET waste and processes almost half of all that is collected globally.

An estimated 67% of this global waste is recycled back into fibres, with smaller amounts turned into PET for the blow moulding industry, sheeting and strapping.

In 2016, PCI Wood Mackenzie forecasts that China will recycle around 4.2 million tons of PET waste and over 90% of it will be re-used as fibre. But currently the industry is being severely impacted by weak demand for its output, as well as by the recent enforcement of stringent environmental controls on the rPET manufacturers in China.

“The value of rPET continues to fall in China; while processing costs and energy prices go up; with the result that profit margins are narrowing all the time,” says PCI Wood Mackenzie consultant Angie Lu. “As a result, many PET recycling operations are moving their plants to the west of China; in order to keep costs down, or even offshoring their operations.” 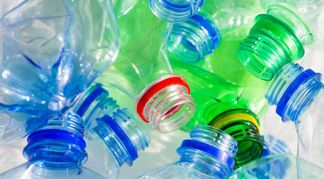 Nevertheless, as will be evident at INDEX™17 in Geneva, many of the leading nonwoven producers continue to incorporate rPET into their collections, especially for use in the automotive sector.

A new all-PET nonwoven, made by Foss, containing up to 75% rPET; for example, is proving popular with automotive brands for thermoformed interior parts; such as trunk liners, insulation components and even exterior wheel arch liners.

The product is successfully replacing traditional composites comprising of a polypropylene plastic sandwiched between a needlepunched PET face fabric and a PET scrim; which brings a number of advantages.

“The new Foss single-fibre structured nonwoven eliminates the need to have further insulating materials between the panels and the car body; to prevent noise and vibration,” says Richard Stockton, sales and marketing director for Warren Nonwovens; which represents Foss in the UK. “It’s also much lighter than the composite it’s replacing. For the same performance, we can replace a 1,800 grams per square metre product; with one that weighs 1,200 grams per square metre. It’s a highly extensible product too – up to 150 per cent – and of course, it’s 100% recyclable.”

Foss Eco-fi polyester fibres are made from 100% certified recycled plastic PET bottles; and the US company now has the capacity to keep billions of them out of landfill. Eco-fi fibres are chemically and functionally almost identical to virgin PET fibres.

With two recycling plants in Italy and a third in France; around 70,000 tons of this output go into European nonwovens production; primarily for use in automotive headliners, and to a lesser extent filter media; with the remaining 10,000 tons shipped to the company’s plants in the USA.

Wellman International, another key figure in the field; recycles some 2.2 billion plastic bottles annually in the production of its fibres; and is Europe’s largest recycler of PET bottles; and also the leading European producer of PET staple fibre. End-use markets for its products range from; automotive, insulation and filtration products to home furnishings and personal care items.

A recent fibre capacity expansion at the company’s plant in Cavan, Ireland; has provided it with the ability to provide finer recycled PET fibres down to 1.7 dtex; which will enable the company to cater to a broader range of needs in personal care; in areas where fineness is particularly important, such as spunlace.

The company has recycling plants in Holland and France; where very effective structures for recycling, backed by legislation, are now in place.

The international technology group ANDRITZ is making an important acquisition in the textile industry. The group signed an agreement...
Read more