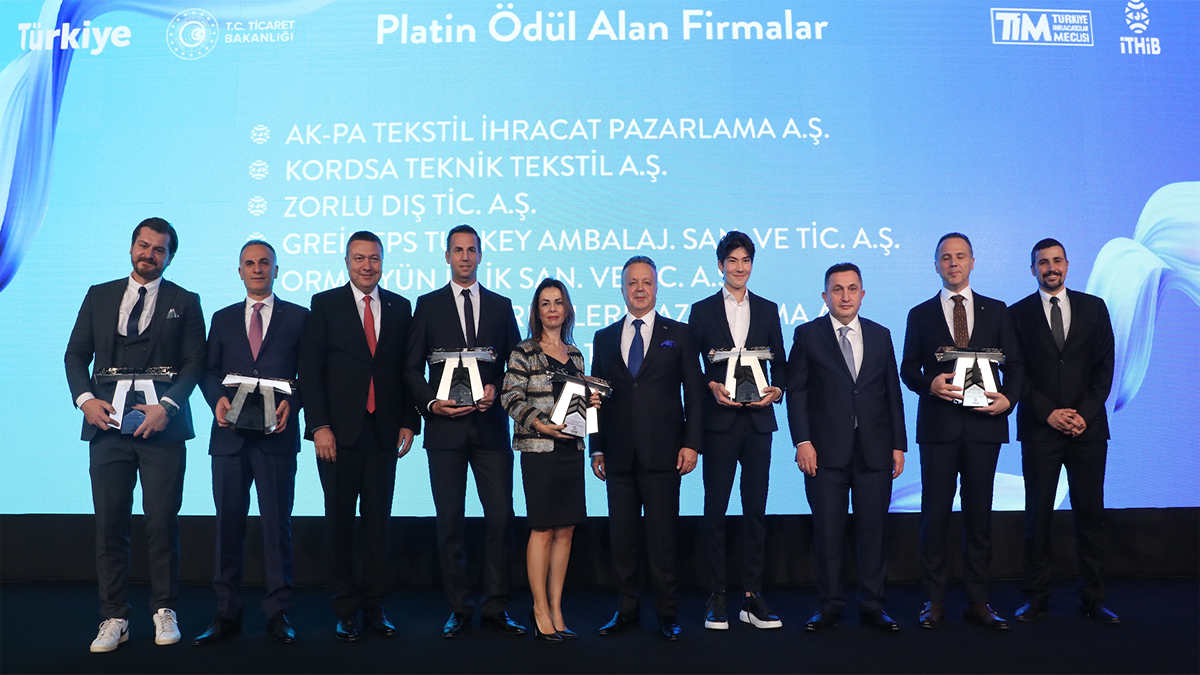 Congratulating all the companies that contributed to the country’s exports and won awards, ITHIB President Ahmet Öksüz stated that everyone has great responsibilities for the Turkish economy developing with exports. Expressing that their aim is to develop the production network, create new employment, increase exports and contribute more to the country’s economy, Öksüz said as follows at the award ceremony:

“We exported close to 10 billion dollars in 2020 despite all the negative impacts of the epidemic. We have become the world’s 5th largest textile exporter by increasing our share of global exports. We increased our market share in the European Union from 15 percent to 17 percent. We are approaching the historical peak step by step with your contribution in 2021. In the January-September period, our textile sector exports amounted to 9.4 billion dollars, increased by 39.5 percent compared to 2020 and by 26.2 percent compared to 2019. Together with the ready-to-wear industry, our employment reached 1.2 million. Our industrial production index reached an all-time high of 141.8. Our textile industry has become the largest exporter sector in Turkey along with the ready-to-wear industry in parallel with all these economic indicators.

The export target of the textile industry is 12 billion dollars

Disclosing that they aim to be one of the top 3 textile exporting countries in the world in the long term, Öksüz said; “There is no reason why our industry cannot surpass its competitors. Besides, our infrastructure, qualified employment power and strong textile companies have the knowledge to reach these goals. The 9.4 billion dollar export in the first 9 months of 2021 shows that our industry has raised the bar of success one step higher”.

Noting that; “The target is clear; we will achieve these together”, Öksüz stated that with the sustainability studies, R&D and innovation capacity program, Ur-Ge projects and fairs they carry out, they will keep working to achieve an export figure of 12 billion dollars in short term and to be one of the top 3 textile exporting countries in the world in the medium term.

Stating that they brought the leading brands of the USA and the fabric companies together with the ‘i Of The World-New York’, which is the only sectoral exported goods fair organized among the Exporters’ Associations, Ahmet Öksüz said that they continue their technical textile and Apparel Sub-Industry Ur-Ge projects successfully. Öksüz noted that they collected requests from companies for the Sustainable Textiles Ur-Ge projects, which will be Turkey’s first Ur-Ge project focused on circular economy and sustainability, and submitted them for the Ministery’s approval.

Speaking at the award ceremony, Turkish Exporters Assembly (TİM) President İsmail Gülle stated that they are progressing step by step towards the record of the history of the Republic in the textile industry this year. Relaying that their new target now is to reach 300 billion dollars of export within 5 years, Gülle said; “Our aim is high; but our exporters have the tenacity, faith and determination to achieve this. We will reach our sectoral and general export targets one by one with the necessary capacity increases and new investments. We also need new investments in our textile sector”.

Sustainability is not a risk, it is an important opportunity

Emphasizing that it is very important for the textile industry to catch up with new trends, İsmail Gülle said; “We announced the Turkish Textile Industry Sustainability Action Plan in July. In particular, our textile industry should lead all our sectors in terms of sustainability”. Gülle stated that the world now speaks louder about green transformation and continued his words as follows:

“We all know the sensitivity of our most important export market in this regard. I invite you to all our industrialists, manufacturers, suppliers and exporters to an understanding of production that prioritizes nature and the environment. Sustainability is not a risk for us, on the contrary, it is an important opportunity. As we achieve these, we will become a brand in terms of sustainability step by step; We will produce for the world without consuming the world. I congratulate once again our export champions who add value to the textile industry and have made great efforts at this point in our exports”.